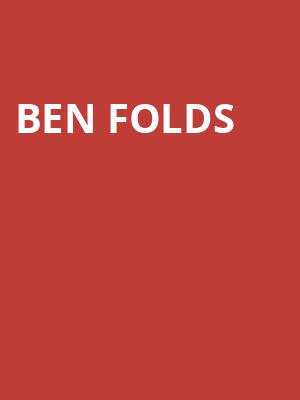 The front man of his self-named band, rock artist and producer Ben Folds continues to work with some of the most eclectic names in music and entertainment (remember his Common People cover that featured William Shatner and Bill Clinton?), as well as pushing the envelope on alt-rock ever further. A self-confessed enigma, he prefers to stay out of the limelight except when touring, but can easily claim credit for some of music's most unlikely trends.

After releasing his memoir, "A Dream About Lightning Bugs: A Life of Music and Cheap Lessons" this year, 2019 sees Folds hit the road once again with his trusty piano in tow! Having worked on some of Hollywoods' biggest soundtracks as well as appearing on Lin-Manuel Miranda's Hamilton Mix-Tape, Folds proves time and time again that he is a man of many talents. Expect to hear his biggest hits when he lands in your town!

When I saw that Ben Folds was joining forces with the Milwaukee Symphony... more

Sound good to you? Share this page on social media and let your friends know about Ben Folds at Hard Rock Hotel And Casino Tampa.