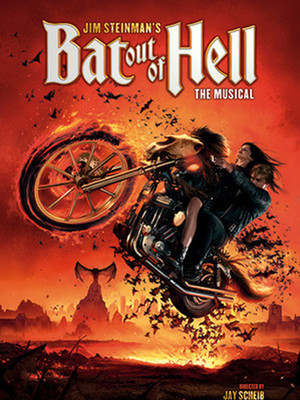 Bat Out of Hell

A jaw-dropping spectacle...Meat Loaf's most famous album finally gets the blazing operatic treatment it deserves

Why See Bat Out of Hell?

Meat Loaf and Jim Steinman's epic 1977 collaboration roars on to the stage in this impressive new musical that has already wowed the crowds in Toronto and in London's West End. Using their unforgettable tunes including titular "Bat Out of Hell", "Paradise by the Dashboard Light", "Heaven Can Wait" and many, many more to score a rocking story of good guys vs bad guys this long-awaited monumental new production will rev you harder than a Harley Davison and have you bopping in your seats from the crashing first bars!

Welcome to a dystopian Manhattan presided over by the villainous Falco. At the bottom of his shimmering tower live a group called The Lost, a bunch of rock and roll rebels who stopped aging at 18. In a whirlwind of shining chrome, spray-on jeans and Doc Martens, their leader Strat falls for his enemy's daughter, the innocent Raven, beginning a fantastic romance that sizzles and blooms as The Lost fight Falco for the right to survive.

So if you're looking for paradise by the theatre lights, you can't go wrong with this high-octane thrill ride!

Three hours with one intermission

Please note, images are taken from the London production and do not necessarily reflect casting for this production

Just saw Bat Out of Hell in London. AMAZING!!!! Phantom of the Opera... more

Sound good to you? Share this page on social media and let your friends know about Bat Out of Hell at Hard Rock Hotel And Casino Tampa.